Kinetic theory explains the temperature, pressure and volume of a gas in terms of the movement of molecules in the gas.

In this model gas molecules are in constant random motion. Evidence for this comes from Brownian motion where large smoke particles seem to randomly move around, this is because they are being bombarded on all sides by air molecules. the smoke particle jerks in a particular direction if the number of molecules hitting on side of it is greater than the other.

In kinetic theory the following assumptions are made about ideal gases;

Click this link for the derivation of the above equation.

What is the root mean square (rms) velocity of  the following three velocities,

The speed of molecules in an ideal gas 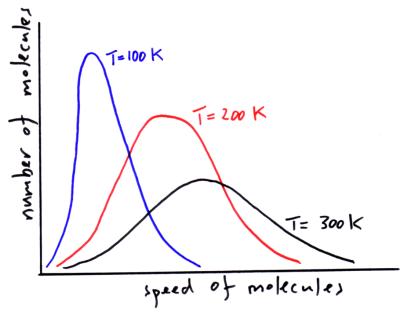 The kinetic energy of a molecule in the gas is;

The kinetic energy of a molecule in the gas is related to the temperature of the gas by the equation below.